My Bookshelf: The Ladies of Ivy Cottage by Julie Klassen

Return to Ivy Hill as friendships deepen, romances blossom, and mysteries unfold…
A gentlewoman in reduced circumstances, Miss Rachel Ashford lives as a guest in Ivy Cottage. With her meager funds rapidly depleting, she is determined to earn her own livelihood…somehow. Her friend Jane Bell and the other village women encourage her to open a circulating library with the many books she’s inherited from her father. As villagers donate additional books and Rachel begins sorting through the volumes, she discovers mysteries hidden among them. A man who once broke her heart helps her search for clues, but both find more than they bargained for.
Rachel’s hostess, Mercy Grove, has given up thoughts of suitors and finds fulfillment in managing her girl’s school. So when several men take an interest in Ivy Cottage, she assumes pretty Miss Ashford is the cause. Exactly what—or whom—has captured each man’s attention? The truth may surprise them all. 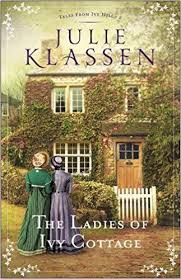 The Ladies of Ivy Cottage is the second book in Julie Klassen’s Tales from Ivy Hill series, coming after The Innkeeper of Ivy Hill. Julie Klassen has always been one of my all-time favorite historical authors, so I almost always order her new books around their release, even if I have no idea what they’re about (which almost never happens because I already have been anticipating her books months before their release dates and know their basic plotline by heart). This story was no exception of course, especially since it was her first ever sequel to one of her other novels, or in other words, this is her first series, so I’ve never read one of her “second books” before.
Let me begin by saying that Ivy Hill is a very captivating place to visit. There is always so much going on, so many characters to love, and one mystery or love triangle after another. Though this novel somewhat resolves those triangles, which I was glad to see, though I won’t tell you how they end up. Besides, I don’t even know the outcome of all of them; just because one part of the triangle is resolved and it’s no longer a triangle anymore doesn’t necessarily mean that the remaining parts got married and now are living happily ever after.
As you’ve probably already guessed, I was really glad to be able to resume the stories of Jane Bell, Rachel Ashford, and Mercy Grove, and I’m still looking forward to seeing how the rest of their lives—at least the parts told by Julie—turn out. And, you probably have already guessed this too, but I have the third, and final I believe, novel of this series already on my “to order” list. The Bride of Ivy Green is going to be the perfect addition to this series, I believe, and I’m hoping it holds some of the endings I have been anticipating throughout my reading of the previous two books.
Now I’ve rambled on long enough, and I haven’t even really discussed my true thoughts on this book. Like I’ve mentioned quite a few times on this blog, Julie Klassen is one of my favorites, so I always enjoy everything she writes. This particular novel, however, wasn’t quite as excellently written as I am used to seeing from her. Now, don’t get me wrong, this story was still beautiful, and Julie’s character development and plot twists were just as wonderful as ever, I just felt like some of the interactions were a little more “surfacey” than I am used to seeing from her. I know that isn’t actually a word, but it’s in my dictionary as “not deep; stilted and forced conversation or interaction in a book or a movie,” and I’m just not used to seeing that from Julie. Even though I am not a published author myself, I am a writer, so I know on a somewhat personal level how difficult it is to have every interaction we write seem natural and not forced or “surfacey,” so I have seen some sections of writing that have fallen into that trap, both in books that I have read and in my own writing.
Other than that, Julie really did a fantastic job with this novel. I had no idea how things were going to play out, and I really, really enjoyed getting to catch up with some of my favorite characters from her previous installment. When I think of how many bookshelves to give this novel, I have a little bit of a tough time deciding, because my real, true answer, I believe, would be four and a half, but I don’t ever give half-bookshelves. Those are not things that you can find in my world. So, I think I’m still going to give The Ladies of Ivy Cottage all five bookshelves, it just hasn’t quite been able to make it onto my all-time favorites list. Which is usually the same as giving a novel more than just five bookshelves, so I think that is a pretty fair rating to me. Besides, I still highly recommend this novel, and the rest of the series, and am really looking forward to reading the final installment myself. Because, this book was still very worth reading, and Julie’s works are still some of my favorites to read.
Happy reading!